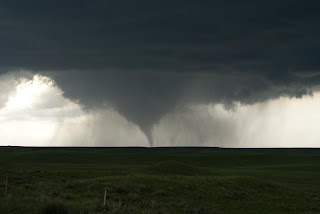 After a long hiatus, we have a new post. Rachel Humphrey, a graduate student at the University of Colorado has written today's post.

I will add a pre-amble. The VORTEX2 fleet made tornado science history a couple days ago. We intercepted a tornadic supercell for nearly an hour, deploying mobile radars, sticknets, disdrometers, mobile mesonets, photogrammetry teams, and in situ tornado pods in an amazing integrated array. Integrated data were collected from about 20 minutes before the tornado formed, through its birth, and almost until it died. Never before has a tornado been studied in nearly as much detail.

Subject: It only took about five weeks...

...but today, V2 finally intercepted its first tornadic storm of its 2009 operations.

Our morning started off in Sterling, CO, and we left the hotel around 11:30ish, making our way north into Wyoming (in a similar location to where we chased yesterday, near the border of Wyoming and Nebraska) and opting to neglect the possibility of storm initiation further to the south. We targeted our first storm around 4:00pm local time, and headed towards the area of intercept in southeastern Wyoming. The environmental conditions were conducive to supercellular development (not amazingly great, but certainly better than what we had seen days prior), as there was sufficient shear and moisture present.

Once it became apparent that the targeted storm was more likely to become supercellular (and possibly tornadic) than the other cells in the region (there were two cells to the north of our storm, the topmost moving northeast, the second one down the line moving almost due east, and our storm moving east-southeast), the crew began to deploy their various instruments. The radars all got into position so there would be plenty of overlap for their radar lobes. The Probe vehicles began to get into position to begin their mesonet transects of the storm (as well as the eventual dropping of the PODs). The disdrometer teams began to scout out locations for good deployment sites of our own.

One of the main obstacles to overcome in our deployments was the lack of visibility due to the presence of large bluffs in the local topography. The radars had to find high terrain on which to scan, so as to not interrupt their beams. The Probe teams had to find terrain on which it was safe to deploy and where the PODs would be level and yet also exposed to the winds of whatever was coming their way. For the disdrometers, we had to make sure that we had good radar coverage as well as exposure to the elements. The bluffs were pretty to look at, but they definitely hampered all of our efforts to do that. However, we got it done - all of us - and once everyone put everything where it had to be, we were treated to the sight of a very large tonado that lasted (on the ground) over 20 minutes, snaking silently towards us (we were positioned near DOW 7 on US-85) while we watched in awe.

It's like a cliche scene from a movie: all the practice that we've been doing, all the dry runs, all the pseudo-deployments carried out in non-severe conditions all paid off today, as once the tornado formed, we were able to watch it from a safe distance while it came near (and, in some cases, crossed over) our instruments. Today's mission was a total success. Everyone's spirits were lifted (seriously, it was getting pretty snarky around these here parts), and all the data has been taken off the instruments already (everyone's eager to see what was obtained - after all, this is the biggest instrumented case so far this year!)

After the tornado roped out, we began to head down US-85 to connect up with I-80, with the intention of calling it a day and heading to Kearney, NE for the night (about 4 hours away from wehre we had just watched this amazing storm). However, while we were driving along, a cell to the north of us began to rapidly intensify, and showed signs of rapid rotation beneath its base. As a matter of fact, at times it looked like the entire mesocyclone had simply extended down to the ground! We (CU) headed north out of Chappell, hoping to rendezvous with DOW 6 to get some radar coverage as the core came over us, but that plan didn't exactly work out. For one thing, visibility was really strange beneath that storm, and it wasn't entirely sure that it would be safe for us to deploy in the core. So, we didn't. Though the storm itself was tornado warned, we never got confirmation that it actually produced a tornado, but we couldn't really be sure from where we were...We weren't in a !
position to deploy on it, and since it was becoming dark, the operations were ended for the day. However, on our ride back (we were on the second storm for over an hour, so our departure from the Chappell region was pretty delayed) along I-80, we at times were literally surrounded on three sides with storms which were either tornado- or severe-warned...It made for a very long, very slow, very intense, but very exciting ride back to Kearney tonight/this morning.

Speaking of which, I should wrap this up and get on with the pictures, since today is supposed to be active, as well - barring any wiping out of regional instability as the result of the propagation of an MCS through most of the state of Nebraska...
Posted by Karen Kosiba at 5:35 PM 38 comments: