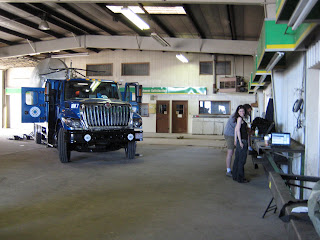 We've stopped in Hays, where we have rented a garage, so we can do some more work on a few of our systems. While we were driving we tested our radios, computers, and tracking systems in 'real world' conditions. Mostly things worked, but with this many radars, mobile mesonets, pods, computers, etc, there is always a bug list. One of the generators on the Rapid-Scan DOW is idling roughly, so we've sent it out ahead to Oklahoma City to get fixed. Maybe it will be fixed by the time we get there.

Our crew ate lunch at a real restaurant today. For a group that has been eating every lunch and every dinner in our Boulder hanger for the past 2 weeks, this was quite a treat.

This is Dr. Karen Kosiba and Paul Robinson working on some software installations. Karen is a recent PhD from Purdue. She is studying low level winds in tornadoes in VORTEX2. She has been on several DOW missions including 4 tornado seasons, a few hurricanes, and to a project called COPS in Germany. Paul is an analyst at CSWR and is working on radar and tornado pod analysis. He is going to have a very tough job this year, at the receiving end of the fire hose of all our data. Jon Lutz is inside the DOW7 making the antenna spin better. Jon is a radar engineer who has been working on DOWs since 1995, on the original DOW1. Jon has been on dozens of field programs with NCAR and other groups, all around the world and is one of the best all around people to have on any field project.
Posted by Karen Kosiba at 7:48 PM