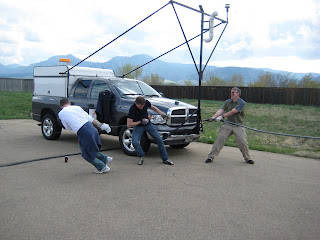 We are in our final hours of frantic preparation before leaving Boulder. We’re behind schedule, so everyone is very anxious to leave. We have lots of our equipment out in the parking lot and we’re packing boxes of spare radar parts, medical kits, cables, computers, etc.

Most of our crew are here. So, we have a dozen or so people working on our 9 vehicles. An IMAX crew showed up yesterday too. They’re filming an IMAX documentary about VORTEX2. They shoot through a whole roll of very expensive film in about 3 minutes.

We’ve had a couple very very long days here since my last post. Some of the hardest tasks are pretty mundane, but critical. Here we’re trying to pull radio cables through a hose that coils up a 56 foot mast on one of the DOWs. It took hour and many attempts. It was a hard, messy greasy job.

The vehicle behind the hose pulling team is one of our mobile mesonet / tornado pod deployers. It has a 13 foot mast with two anemometers (in case one is smashed by hail), and a thermometer and relative humidity instrument inside an S-shaped shield which keeps dry air flowing over them. Yes, we've hit branches, wires, and fast-food drivethru overhangs with them; it is pretty ugly. But, getting the instruments as high as possible above the ground and into the wind is important.

Our newest DOW will be tested in just a few hours. If it works, we can go, if it doesn’t, it is another long night of work in our hangar.

Well, that’s all for now. Next time I write, I hope it is from the road, after some successful practice deployments.