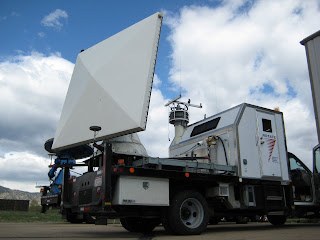 I am writing from Boulder, unfortunately. We tried until 12:30am last night, but couldn’t get our last radar working. The problem is that the antenna will not spin. We got all packed up, but then had to have our crew go back to homes and hotels. This morning we’re trying again and we hope to leave by afternoon.
The picture is of a radar that we did get working. It is the Rapid-Scan DOW. Normal radars send out one beam, kind of like a flashlight beam. This is great for most uses, but not for studying tornadoes. The problem is that even the very fast-spinning DOWs, take a full minute to collect a 3D volume of data. Essentially we just get a picture of a tornado once per minute. But, tornadoes change very very quickly, sometimes evolving a lot during that minute between our ‘pictures’, and we miss how those changes happen.

The Rapid-Scan DOW has a pretty clever design that allows it to send out 6 beams simultaneously, but at different inclinations. So, we can ‘rake’ the sky with these beams, and in one sweep of the antenna we have a 3D image in the lowest few thousand feet of a tornado…every 5-7 seconds. Now we can see those extremely rapid changes.
The first time we took the Rapid-Scan out to see tornadoes, it was able to collect 3D images. We collected data in 6 tornadoes in 2005. But, it was not able to see enough, was not able to see what radar meteorologists call ‘clear air’ echoes just outside the tornado. We have that fixed, and have upgraded other components, and we’re ready to go. We did some final tests by placing a microwave ‘beacon’ on the roof of my house, and seeing how the 6 different radar beams saw it.

But, back to today. We are itching to go. We’re all waiting for the final DOW radar, DOW7, to have its problems fixed and tested. Maybe my next post will be from the road
Posted by Karen Kosiba at 1:06 PM