No gold at the end of the rainbow yet 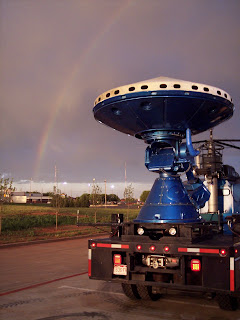 VORTEX2 conducted missions on Tuesday and Wednesday...but we didn't intercept any tornadoes. On both days we intercepted very interesting weather. Wednesday featured a line of storms which contained a couple supercells. One made a tornado, but VORTEX2 had chosen a different storm. We got a chance to test tornado pods on Tuesday and the Mobile Mesonets had a good mission on Wednesday. We deployed several of the radars on the storm, but not in the coordinated way we had written in our operations plan. The biggest problem was that the weather was very difficult with the target area moving in jumps from place to place (we call this discrete propagation. Also, the storms were moving in a very unfavorable direction compared to their shape, so radars had to run away from the hail cores very shortly after they parked.

Today we are 'down', which means we are working on various systems. We fixed a broken hydraulic foot on DOW7, fixed a broken generator on the Rapid-Scan DOW (yes the one we just purchased last week!), and worked on some computer problems on a couple mobile mesonets. With this many instruments (CSWR is fielding 21 separate weather stations), there are always things that need fixing.

Friday is our next mission day and we are hoping that we get some good data. And, we're hoping for an early night and some good rest this evening.
Posted by Karen Kosiba at 5:20 PM