Atmosphere, I think this is the beginning of a beautiful friendship... 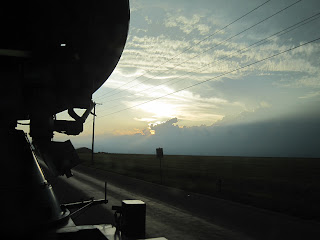 (the CliffsNotes version...Did I just date myself?)

Brief joust...moved from hotel location in Clovis, TX to Vega, TX. Inched (kilometered) up the 385 to a picturesque vista (artistic liberties).

Target storm...The armada moves north towards Dumas, TX. We do the supercell samba (that is such a lame analogy, I know! I just wanted to illustrate that we do a complicated deployment choreography--is the samba choreographed?!--where we have all of our instruments surrounding the supercell in some organized fashion and continually adjust as the storm evolves).

Road options were few, so we sambaed where we could. Radar data indicated good rotation (when not taking tornado-scale measurements, the DOWs are about 20 km away, so we do not see very near the surface) and numerous teams reported funnels.

We kept jockeying to the east, following the storm, until The Ultimate Road Hole was encountered by Stinnett, TX. It was late and the next north/south road was about 3o minutes to our east. We either could say" Goodbye" to the storm for the night or say "See you in 30."