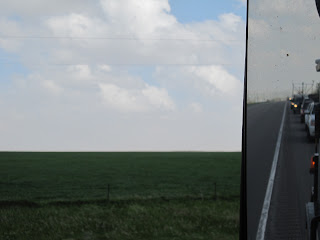 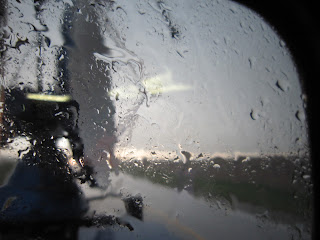 And the state of choice is...?
Nebraska.

Today was tough. We got arrived in Colby, KS around 930 PM last night, had dinner (watched House), and went to bed. We woke up to a SPC (Storm Prediction Center) forecast (based on a late night model run--we get model data a few times a day. this data is part of what we use to make our forecast) of a moderate risk for severe weather in South Dakota. Of course, we are all sensitive to South Dakota...!

We have a pretty good schedule in the morning--the "head" (i.e., funded) scientists meet first for a forecast discussion and then the rest of the Vortex2 meets. Usually we depart soon after the "all-hands-on" meeting. Remember there is 100+ people--so this is a very effective way for us to make decisions and communicate information. Most of the "heads" consult with their crew (bodies?) before the first meeting, so everyone usually is in the loop.

I give you this background only to say, in order for us to be in central South Dakota today (hey, that rhymes!), we would have needed to have 140 people leaving Colby by 630 AM. That's tricky. Especially when we positioned ourselves for a very reasonable (and meteorologically favorable) target in NE/KS. We decided to stick with our first choice (not the northern morning "surprise"--which I believe came with real Vermont maple syrup).

The storms grew upscale quickly--Old Navy to Barneys (what "upscale" really means is that instead of discrete, isolated storms, storms congealed into lines. This is not so good because this "mode" does not favor long-lived tornadoes). There was some quality hail--which is good for the disdrometers--and some short-lived circulations (marginatoes or DOWnadoes, as they are affectionately dubbed).