The storm remains the same... 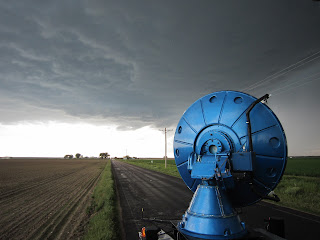 5/25/10
We left I-80 and headed south to I-70 and west into CO.
Initial target town: Sheridan Lake, CO (couldn't see a lake...)
We did our parking lot thing (napping, eating, napping) and I quickly was getting convinced I would not be turning on the radar that day (that would be a first!). Obviously, just by thinking such a thought (I think I uttered it out loud, as well), this Vortex2 "milestone" was not reached. A storm became interesting in western KS (Tribune, in fact). The interesting storm became interesting stormS. These storms produced numerous landspouts (5, I believe). Landspouts are nice, but not super nice (is there a synonym for nicest?). They are weak, short-lived rotations that last for ~ 1 minute. Storms moved north and west and then did not move...which makes targeting "projected" storm paths tricky. Overall, though, we collected some good data documenting storm interaction (this seems like a Miss America answer...but with non-nonsensical storms, it feels appropriate).

The CSWR crew returned to our Boulder home base (the DOWs needed some love) and the rest of the Vortex2 armada stayed about ~1 hour north in Loveland, CO in anticipation of a trip to Canada...(Montana, actually).

5/26/10--The gentleman's chase (almost)
The DOWs received their tender loving care starting at 600 AM. As tea time rolled around, the weather perked up just west and north of Boulder/Loveland. Our tea and biscuits were abandoned and the chase was on. We targeted a storm near Hudson, CO. We targeted it very well (A+ for Vortex2). Additionally, we were in a region where the UAV (unmanned aerial vehicles) could fly around the storm, getting thermodynamic and wind data above ground level. The storm did not produce a tornado (C for the atmosphere--presentation was good, but failed to produce).

27 May was looking good for NE Montana...but we decided it was not looking good enough...(and passports were still in safety deposit boxes).
Posted by Karen Kosiba at 11:42 AM