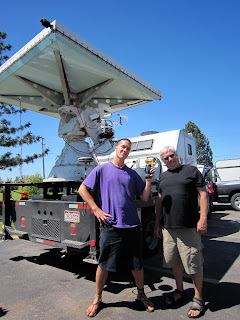 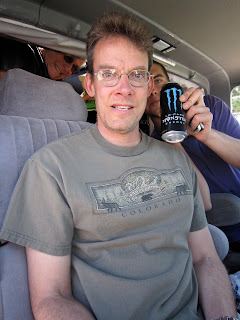 Since today was not a mission day...Meet DOW5!

As tornado scientists, we are interested in documenting the rapid evolution of a tornado's wind structure. We also are interested in the wind distribution very close to the ground, because these are the winds that cause damage to houses, office building, etc. Linking wind speed, direction, and duration with damage incurred is one of our primary objectives.

In about 7 seconds, DOW5 is able to scan 6 elevations (heights) simultaneously (this is accomplished through electronic elevation steering and mechanical azimuth scanning). Most radars can scan only 1 height at a time--which means it can take up to 40 seconds to scan 6 different heights (50 m then 150 m then 250 m...550 m...and then...40 seconds later...50 m). "So what?" you may ask... Tornadoes evolve quickly--and, actually, 40 seconds is quite a long time for an update in tornado structure (it is also an incredibly long time for a 50 m freestyle!). For example, if you observed me as a 5 year old and then observed me again as a 25 year old--I bet you would have a lot of questions! But, if you observed me every couple of years until I was 25, you would have a lot less questions about how I became the person I am (maybe!). See the advantage?

As DOW5 is a tornado-scale radar, she tries to get close to the tornado (as is safe!). By getting close to the tornado, she is able to observe features of a tornado that are barely discernible to other radars. If Grandma was 100 yards away from you, she probably would be pretty indistinguishable from Grandpa. But, if Grandma was 10 yards away, you would be able to tell it was Grandma--not Grandpa (I hope!!). Similarly, although DOW5 cannot see the entire football field (that is 100 yards...right?), she can tell the difference between Grandma and Grandpa (and tell you what Grandma looks like).


Picture 1 (Left): Travis (left) and Jon (right) Lutz. The father and son team of DOW5. When not napping in the back of DOW5, Jon, a "retired" radar engineer spends his free time working on DOW6 and DOW7. He also operates DOW5. Travis drives DOW5 and in his free time fixes broken pods and mesonets. Travis would rather eat an orange than a cookie.