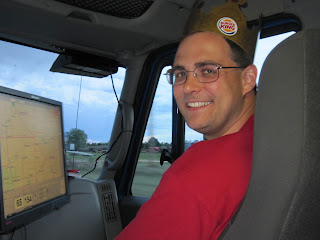 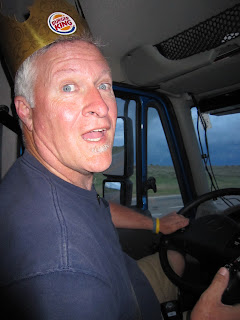 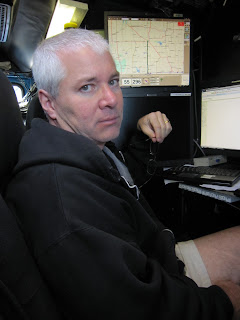 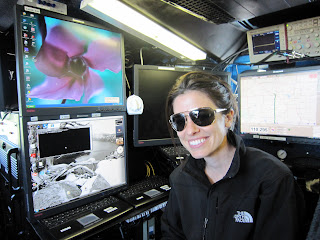 don't have any missions, I thought I would introduce you to our crew members and their vehicles.
Today I will cheat...

Welcome to DOW7!
During Vortex2, DOW7 functions as a mesoscale radar (there also are storm-scale and tornado-scale radars). As a mesoscale radar, DOW7 primarily takes data in the rear flank of storms. Although tornadoes do occur in this region of the storm, we are focused on obtaining data at a scale that is a bit larger than the tornado-scale (very generally, this is known as the "mesoscale"). We sacrifice temporal and spatial resolution in order to get data over a larger area, thereby capturing processes that contribute to tornadogenesis, maintenance and demise.

In conjunction with DOW6, we collect something called dual-Doppler data. All this means is that DOW6 and DOW7 collect data in the same area of the storm at the same time. We then combine this data to get a 3 dimensional representation of the winds in a storm.

Picture 1 (Top, Left): Jeff navigates DOW7. He routes us, directs Herb where to turn, keeps track of other teams, and eats Jalapeno Cheetos.
Picture 2 (Top, Right): Herb drives DOW7. But "drives" barely describes what Herb does. He drives long hours in bad weather, levels the truck, fixes anything that breaks, and eats peanuts.

Picture 3 (Bottom, Left): Josh is the radar coordinator for all of Vortex2. He has to get all (10+) of the Vortex2 radars in positions to take coordinated data throughout the duration of the mission. He also gives other (non-radar) teams storm information. All of this is done while drinking Perrier.

Picture 4 (Bottom, Right): That's me...in the far back of DOW7. I operate DOW7 and coordinate tornado pod deployments.
These pictures do not exactly solidify our position as the "cool DOW"...
(don't worry, I am in the process of obtaining "cool" pictures of DOW6)