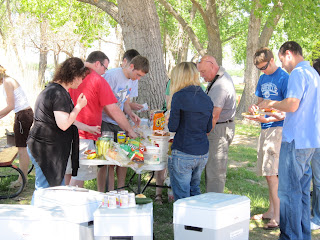 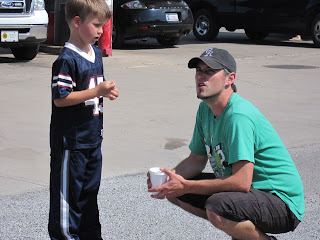 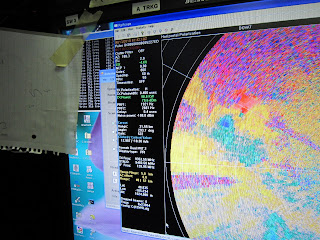 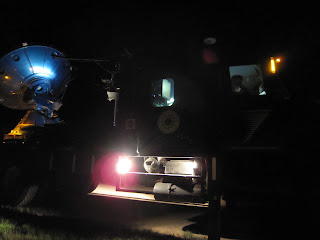 After a restful night of sleep (we stayed at one of those hotels that provide you with a pillow menu), the weather discussion commenced around 1000 AM. After some discussion (and 1 sword fight), it was agreed upon that we would target a region located ever so slightly to our south and west (we were in Weatherford, OK and decided to target south of Elk City, OK). Although the region we picked had an environment supportive of supercells, it was questionable whether storms would form before dark. The other choice was near Wichita, where there likely would be storms, but in an environment that was forecast to be slightly less favorable for supercells. Dilemmas of this sort actually are quite common--this is why we bring swords.

Since the region of interest was not too far away, we had time for a nice picnic lunch at Lake Foss. We spread out our little red and white checkered blankets, unpacked our wicker lunch baskets, and served the brie and crusty baguettes (artistic liberties).

After our picnic, we adjourned to a concrete park in Elk City, OK. As far as concrete parks go, this one was particularly nice. We played football (well, not me), ate ice cream (also, not me), and took naps (me).

Around 400, we moved south and attempted to collect data on the southern flank of a line of storms. It immediately became apparent that we were too far south and the more interesting storm was farther up the line, to our north. Near sunset, we successfully scrambled north (near Cordell, OK) and redeployed on a storm that was associated with a tornado report near Clinton, OK. It was a "storm-scale" deployment so no low-level data were collected. Our radar data indicated rotation aloft, so it is possible there was rotation at the surface (is that enough of an equivocal statement?! I should have been a lawyer, I know.).

By all accounts, the deployment went well. Dual-Doppler lobes were set up with DOW6, DOW7, Umass-X and NOXP. The WOWs (ha! ha! I think this name just might stick...now if I could only come up with one for the disdrometers...), sticknets, and disdrometers were in the dual-Doppler coverage area, which means we obtained a good, integrated (thermodynamic, surface, and radar observations at the same location) data set (bonus, since this is an objective of Vortex2).

It was a nice day.

Picture 2 (Top Right): Justin Walker explains the intricacies of interpreting Rho-HV in to an aspiring meteorologist.

Picture 3 (Bottom Left): This is my idea of a storm picture.