The truth is out there...somewhere. 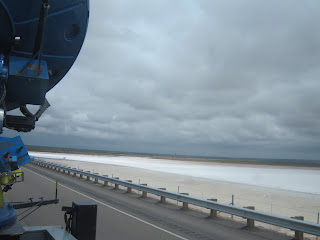 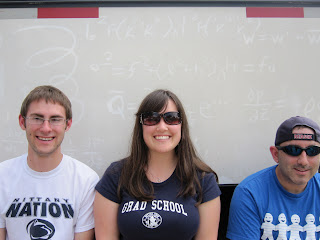 Today we traveled to the Land of Enchantment, home of Peppy the Pistachio (you truly are missing out in life if you don't pick up travel brochures at gas stations...!).

After a noncommittal morning forecast, we departed Midland, TX around 100 PM CDT. There were two regions of not much interest (but we are optimists!) today--one in TX near interstate 10 (passports, please) and one in southeastern NM. The previous evening yielded a MCS (mesoscale convective system--a fancy name for a big mess of "organized" storms, BMOS. I think I will write my next post entirely in acronyms) that produced copious amounts of rain and clouds (R&Cs) . R&Cs can be bad for severe weather the next day because the R cools the air and the Cs prevent heating, both of which suppress vigorous thunderstorm development. Since only 6 Vortex2 crew members had their passports, we targeted New Mexico (it also emerged as the meteorological winner).

As roadrunners and yuccas began to dominate the landscape (artistic liberties), we drove farther west than...eastern Denver. Storms formed over the high terrain in NM, but dissipated as soon as they moved east (this is relatively common--the terrain provides a source of lift, which can get air moving vertically. If air rises to a height that renders it unstable, storms can form. But, if the terrain is the only thing that a storm has in its favor, storms will quickly die once they lose this lifting mechanism). Around 500 MDT, a storm finally showed signs of moving east off of the Sacramento Mountains. And east it moved. Since it was the only show in town, we bought a ticket. We collected dual-Doppler data with 4 radars (DOW6, DOW7, NOXP, and UMASS-X). The Ka-band radars, DOW5, and a SMART-R collected single Doppler data. The WOWs, Sticknets, and disdrometers deployed. Overall, it was a very good deployment...on a non-tornadic storm (but, we still have a lot to learn on these types of storms, as well!).

Picture 2 (Right): When waiting for storms, we like to sharpen our calculus skills. Matt Ryzdik (formerly a Nittany Lion soon to be a Badger), Mallie Toth (Boilermaker) and Evan Bookbinder (from the Kansas City NWS) quiz each other on the equations of motion. This is common practice (we do not play Frisbee, football or swing on swings, we do math) . Tomorrow, Maxwell's equations.
Posted by Karen Kosiba at 11:20 PM